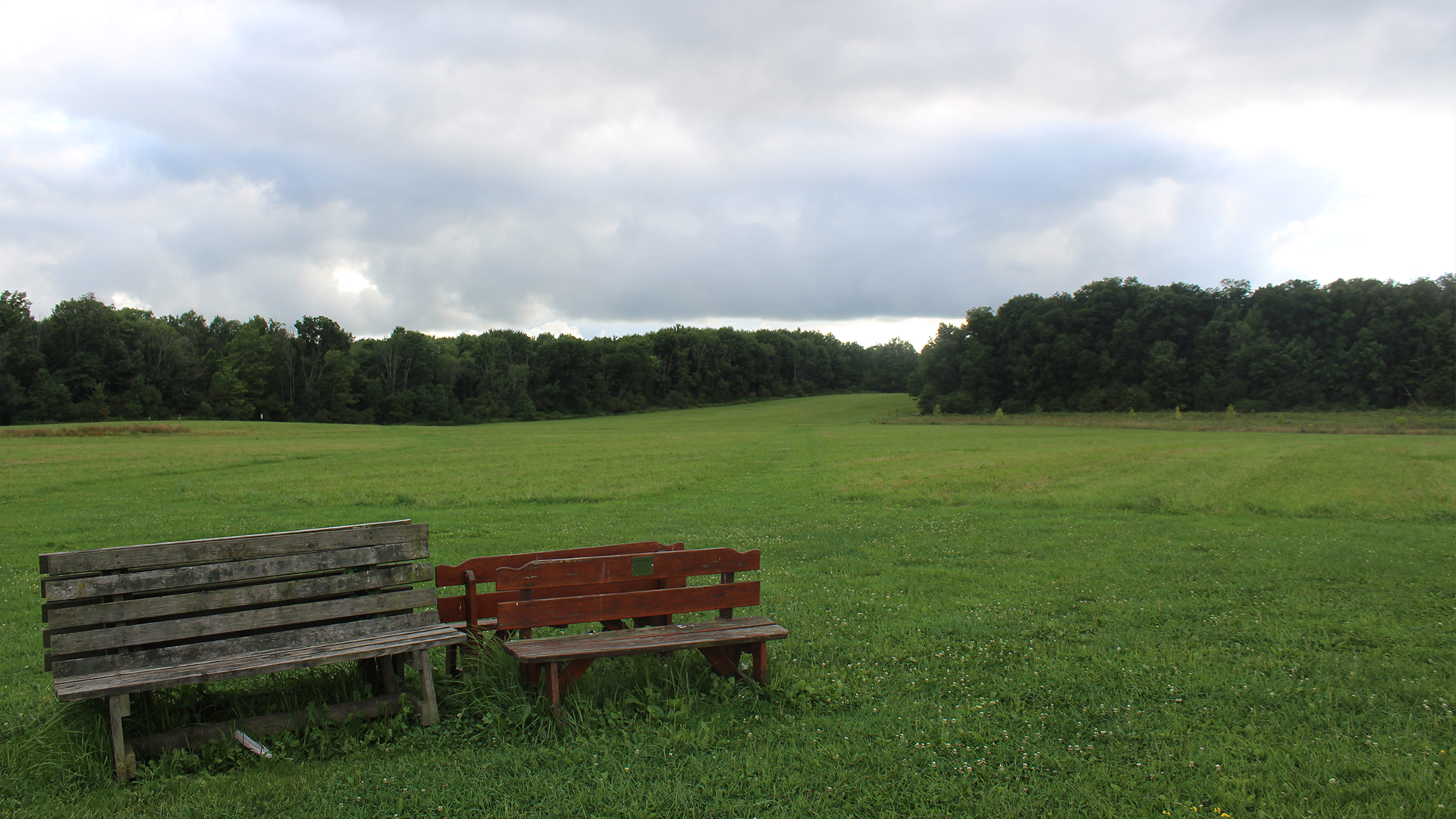 The Story
Transcript
written on
August 18, 2021

If you pull into the small gravel lot of South Russell’s Village Park at a quarter past four in the afternoon, you’ll see the gentle upward slope where an over-hundred acre park begins.

You’ll also probably notice the brand new wooden playground (constructed in 2020), or the large turkey vultures who swoop in and out of the park’s tall grass. But if you are me, and you’re lucky, you pull in to see the mayor putting cautionary cones into a red pickup truck.

It’s Friday, and South Russell Mayor William Koons was at a local farmers market when he received a call that the scheduled mowing for early August had just finished. He doesn’t usually open the park back up after Bill Timmons, local farmer, is finished clipping, but he tells me with a grin as when we settle to talk in the neat pavilion that “[he] was in the area.”

The pavilion we sit in was built in 2014, as were the wooden picnic tables. Dr. Koons thinks it has held up pretty well except for the one table in the back where “one kid scribbled his name or something.” Actually, the pavilion and playground are some of the only pieces the city has real control over within the park; most of the grounds are owned by the Western Reserve Land Conservatory.

“People want to put in a bocce ball court,” the mayor tells me, but there’s a different project at the forefront of his mind. “People really want a restroom.” As of today, the park’s porta potties have become frequented by more delivery drivers than hikers.

My accidental meeting with the mayor is just that - accidental - even in a town this size. South Russell has described itself as “four miles and one stop light.” His urgency to open the parkland might have something to do with the fact that this is the first time the fields have been mowed since the departure of their summer guest; the bobolink.

Bobolinks are an endangered species of blackbird which pass through parts of northern and central Ohio on their journey southward. They routinely stay in golf courses or hay fields through the duration of their breeding season, which span from mid-May till the end of June. You might have even heard their distinctive call earlier this summer; many nature profiles describe it as plinking or a “clanking sound.” Or, if that doesn’t ring a bell, Joseph Lautenbach of the Ohio Department of Natural Resources likens it to R2-D2. They also have bright yellow heads.

But now the Bobolinks have gone, and South Russell Village Park can mow its grounds to below the height of a child’s head again. I wave goodbye as Mayor Koon gets back into his city’s truck (“I’ve never driven it before!”), and then it is just me and the turkey vultures and memory.

And one hundred and three acres of mostly-grass paths. If you squint, they sort of look like a golf course, especially when you consider the sweet wooden signs which mark quarter-mile paths dubbed with names like “Shady Dog Trail.” There are over twenty projects by the Scouts of America within the park, many of which are the signs themselves. Madison Russo of Troop 674, for instance, made the sign for Shady Dog.

In the warmer months of the late 2010s, I used to run here before my afternoon classes at a vocational program in Chagrin Falls. Mid-morning, the dew hadn’t yet evaporated, so my sneakers would instantly grow cold and damp as I trotted over uneven clumps of earth. At ten A.M, it was usually just me and the occasional dog-walker on the course, but in speaking with Dr. Koons, I discovered that Kenston’s cross country team also runs on the conserved land. Apparently it’s in an effort to mix up the daily run, as well as practice what Mayor Koons called “ankle breakers.”

I remember reading once that runner’s high is in some way related to the feeling you get when you come to a precipice or clearing, when the land stretches out on all sides of you. This isn’t a connection I can verify with a cursory Google-search, but I somehow keep believing it. Possibly because of the hours I’ve spent jogging in this small, but open, area.

Walking the paths again, I start to remember that the hardest part is always at the beginning - where the incline is steepest at the northern end. The paths start in the center of the field, where the sun can best beat down on the crown of your head, and the ridge keeps the rest of the conserved land out of view. But five or so minutes later, you can reach the top where there are benches and bat boxes built by the Boy Scouts in a clump of trees.

This is where the park comes alive for me. The high grass ripples with every slight breeze, the pattern disrupted by small moth-colored birds darting in and out. If I was sixteen I would roll my shoulders, pop in my earbuds, and set a quick pace. But it’s the middle of the afternoon, and I’m not sixteen, so I head towards the new wetlands installation instead.

Even on a warm morning, I remember this section as being less-frequented than others. A large puddle used to form in the path’s valley, but with the newly excavated soil and Agri drain, the ground remains dry. I still catch myself pulling my feet up high with each step out of habit. The wildlife around the park seems to be adjusting to the new features as well, with American Bald Eagles and cranes popping up more and more frequently.

Mayor Koons lovingly dubs the area “a hayfield we call a park,” and a few years ago I would have agreed with him. Back then I valued the privacy of the park above all else, but after a year of nothing but privacy, I found myself enjoying the more plentiful hikers and families with small kids. The dogs with blue handkerchiefs around their necks.

It’s not just the new playground and the several accompanying plaques. The mayor told me that the Girl Scouts are planning on expanding their small butterfly garden to attract more monarchs next season, and also about the teahouse on the southern side, donated by the Bainbridge Library during their renovation. This park, this conserved land, has been well-looked after during a year inside. And now? Now I can tell that new rocks have been stacked on top of one another on the North Woods Trail. I see new goldenrod and wild raspberries.

It can be difficult not to be cynical, especially after the year we’ve had. And it can be difficult to trust memory too. But sometimes, every hundred shuffles of the metaphorical cards or so, sometimes you get to come back to a place which is better than you remembered. Which continued thriving under the care of others who love it just as much as you.